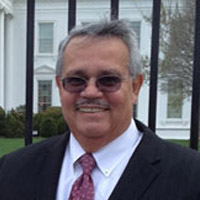 Mr. Vasquez has in excess of 30 years’ experience in Public and Corporate Finance. He is a former Senior Managing Director (partner level) at the Bear Stearns Company. He has advised and assisted his clients in executing bond and equity transactions, privatizations, public private partnerships, and asset management. Mr. Vasquez’s experience also includes serving in the public sector in a variety of roles.

Vasquez served as a Senior Managing Director in Bear Stearns’ Public Finance department. In addition to his experience as the lead banker in a series of general obligation and revenue financings throughout the US, he has been a leader in a variety of creative and complex financings including leveraged lease and project financings, securitization of receivables, maritime new building financings, etc. After leaving Bear Stearns, he organized and ran until their sale in 2013, two registered investment banking companies, VAB Financial, LLC. which was part of the underwriting syndicates in PR, and VAB Advisors, LLC. which asset managed a significant portfolio in Puerto Rico.

Vasquez has served as a lead advisor to a number of important capital investment/P3 initiatives. This included structuring and execution of a major LNG terminal, a 500 Megawatt combined cycle power plant, a 450 Megawatt coal-fired power plant, etc. The power plants provide about 30% of the energy requirements in the Commonwealth of Puerto Rico and have proven to be the lowest cost and most efficient components of the system.

Vasquez also conceptualized, developed, and financed an optical fiber telecommunications company for a governmental client. The company was started without equity investment or off-taker guarantees using a unique structure developed by Mr. Vasquez. Mr. Vasquez engaged the entire management team, oversaw the strategic business planning, and the various processes for the construction and acquisitions and financing of the start-up system. The startup system initially included a 1,200 local kilometer optical fiber network, a satellite communications system, and a submarine optical fiber landing station. The company continues to operate very profitably.

Vasquez was one of the five members of the board of the unstaffed New York State Public Asset Fund (NYSPAF), which was responsible for optimizing for New York State the financial benefits of converting not-for-profit health care insurance companies to for-profit entities. NYSPAF produced major capital benefits for the State. Mr. Vasquez participated in the development, screening’, and execution of a strategic series of very successful and innovative equity hedges. The hedges have been credited with preserving the funds value during the huge financial crisis of 2008, which heralded the failure of many key businesses and major declines in consumer wealth. Mr. Vasquez also participated in the development of guidelines and oversight for the conversion of not-for-profit HMO’s to for-profit entities utilizing IPO market and merger alternatives.

Vasquez also served in various positions at the Port Authority of New York and New Jersey. He commenced his employment in the General Services department until promoted into the interim position of Assistant Manager of Purchasing and then to the position of assistant manager of Communications Services. He was promoted again (until his departure from the PA) into the position of Assistant Director in charge of program management for the redevelopment of Kennedy Airport, with complete authority to hire and fire. One of the programs that Mr. Vasquez instituted while serving in the General Services Department was targeted to deal directly with significant emerging issues of harassment and abuse of power. The program was a very successful series of initiatives targeted to define and instill the ethical, moral, and social rights and obligations of an employee as a person within the organization, regardless of one’s organizational level or title. The program, titled “An Employee’s Bill of Rights”, built organizational trust, mutual respect, and commitment among all levels of staff.

Prior to the Port Authority, Mr. Vasquez was employed by the Puerto Rico Marine Management, Inc. which provided all of the management services to the government owned Navieras Steam Ship Company. Navieras, at the time, controlled almost 90% of all the marine cargo coming into or out of Puerto Rico. He was initially hired as Director of Planning, but was promoted into the Treasurer’s position, and ultimately into the position of Senior Vice President and Treasurer. The departments that reported to him included treasury and cash management, collections, accounts receivables, payroll, budgeting, and planning. He managed the relocation, re-staffing, and re-organization of each of the departments when company headquarters were moved from the Newark New Jersey to San Juan Puerto Rico. He was also responsible for negotiating the new building contracts and financial agreements, MARAD Title XI financings for a number of large cargo vessels, and a number of other structured financings.

Earlier in his career, Mr. Vasquez was employed in a financial advisory/ strategic planning position at the worldwide headquarters of the Exxon Corporation. He participated in the development and review of the worldwide strategic plan, with his focus being logistics and special projects. Prior to Exxon, Mr. Vasquez was employed by the American Electric Power company, one of the largest utilities in the United States. His responsibilities were power systems planning.